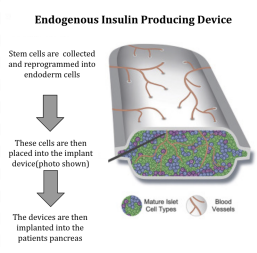 In 1921, a hormone in our body called insulin was discovered. Insulin is a hormone that regulates our body’s glucose (sugar levels). Type one diabetes is an autoimmune disorder where the body will attack a type of insulin-producing cell called beta cells. The most common treatment for type one diabetes available right now is a closed-loop artificial pancreas system. This is a system that automatically injects the patient with insulin. Recently there was a clinical trial for a new technology involving stem cells that could treat type one diabetes. The hope is that this treatment will be more reliable and trustworthy than the current technology available. As great as the closed-loop system is, there are a couple of cons that make people hesitant. The two major cons of these systems are the price and putting all your trust into these devices. There’s a good chance that this new stem cell technology will also be expensive, but luckily the implant would only be a one-time payment versus a continuous investment. There is also a fear of relying completely on the multiple devices needed in the system. This fear comes from the fact that if one device were to malfunction there could be severe consequences.

With the research from Dr. Shapiro and his colleagues, they were able to implant seventeen type one diabetes patients with the generated cells. Of the seventeen patients, some

were given one large implant while some were given multiple small implants. All implants included the generated insulin-producing endoderm cells. The seventeen patients were selected because they fit certain parameters such as age, time since diagnosis, and hypoglycemia awareness. All patients were required to be between the ages of eighteen and sixty-five due to safety concerns, and the average age of the trial was forty-seven. The trial also required that all patients were diagnosed for a minimum of five years. Time since diagnosis ranged from eight years to fifty-two years. The last demographic of the patients was their awareness of hypoglycemic symptoms, which was measured via their Clarke score. These demographics, along with a few others, were selected to assess how the implant may affect different type one diabetics.

The results of the clinical trial provided a lot of hope that there could be a new treatment for type one diabetes. Most of the patient’s bodies reacted well and accepted the implants. These patients were monitored often but had two main examinations at six months and twelve months. After six months, six patients or 35% of the trial showed signs of naturally produced insulin following meals. After a year, eleven patients or 65% of the trial had evidence of natural insulin production daily.

Within the first twelve months after the patients were given the implants, there were a total of 297 adverse events recorded. An adverse event is an unexpected physical or mental medical occurrence that happens after an immunization, procedure, or treatment. The adverse events were classified based on severity and causes.

Risks and Next Steps

The largest risk of the artificial islet currently is that there is not enough data to predict how different people’s bodies are going to respond to the implant. This is proven by the fact that there were multiple different kinds of AEs and multiple different severities. There is also no current data to see what the continuous or long-term effects of this transplant are if any. The next step for Dr. Shapiro and his colleagues would be to collect more data by continuing to monitor the original seventeen patients as well as conducting another trial. This would be

beneficial because there would be more data to prove the effectiveness of the transplant. Conducting another trial would also provide data that could be used to determine if the implant is only successful for a certain group of people, for example, it may work better on a group of younger people versus an older group. Another step that Dr. Shapiro may consider is seeing if the implant could be successful without the use of immunosuppressants or anti-rejection drugs,commonly given to transplant patients to target white blood cells and weaken their immune systems. This helps type one diabetes patients to accept the implant as well as produce insulin. This would be a useful next step because if the implant could be successful without the use of immunosuppressants, it would become a lot safer for type one diabetics, who are often told to avoid immunosuppressants since they already have a somewhat compromised immune system.

In conclusion, the research and clinical trial which was done by Dr. James Shapiro involving artificial insulin-producing islets derived from adult stem cells have provided hope that in the near future there will be a “cure” or a more reliable treatment for type one diabetes. The results from the clinical trial were promising as eleven patients naturally produced insulin after a year with the implants. However, because of the high amount of adverse events and lack of consistency throughout the results, the transplant is not clinically relevant…yet!